The only real negative feedback I can think of right now was the placement of the safety tent.

I want to point out that I was not against having a tent like that this year. In fact, I’m glad we did. It was a good idea to keep all of that stuff in one tent instead of multiple tents.

I know I’m not the only one that was unhappy about where this tent was placed though. I was told it was only placed there because of some problems getting enough power there, but I’m sure that could be fixed next year.

Putting that tent right in the middle of two camps was a bad idea. People in that area were basically denied any sleep until the party quieted down and I know I’m not the only one that was unhappy about that. Especially since I got sick mid way through the con, sleep was the number one thing I needed and not getting that rest made me completely exhausted the next day.

I suggest putting something like that either next to the Happenings area /away/ from private tents, or in a different site if we get all three sites next year.

Other than that. CFT was 110% better this year and I can’t wait to see what next year entails

I think I know where we can put it next year to avoid issues. But I would need to physically show someone XD

On top of the hill where Scritch hid his tent? xD

As CK’s party area is not a CFT sanctioned happening, area or construct but rather a single camping area utilized by a patron, I’ve gone and passed on this thread for him to see. We may have held some Happenings outside of his tent as it was a convenient gathering spot that formed a large hub of activity, but please do not be mistaken. CK is not CFT staff, nor is his area a part of CFT. If his activities and parties disrupt staff and attendees from having a good time, counselors/hosts are fully 100% within their rights and power to shut things down for the sake of their campers.

Hey yall, just wanna say that said safety tend was an experiment done by me, and as crowley said, has nothing to do with the official con. If it caused folks any trouble, I am willing to remove the “safety” aspect alltogether and just make that the site of the communal bar and nothing more. THAT said, since it was just an experiment, I am willing to work with everyone to try and do it right if it is to be permitted to exist next year. I am open to all feedbackl and want to make this con the best I can for ALL involved, regardless of how one likes to unwind

It really just needs to be moved to the farthest end of one of the sites, probably A

But site A is where people went to get away from crowdsâ€”moving it out there is just going to move the crowd into the refuge of people who don’t want a crowd.

So, if I am hearing all this correctly, the main problems with the safety tent were just location and perhaps a certain lack of discretion? I can think of a couple spots onsite I could place it to solve the former,(ie Scritches or Oce’s locations, or something else similar. and a list of rules stuck to the inside of the front door to handle the latter (first rule of safety tent club is you do not talk about safety tent club).

My main problem was the noise level. Loud people and music kept everyone else up. I otherwise had no problem with the tent or who was using it or what was being used in it. It should just be away from the main camping area if it’s going to be that loud again.

It just needs to be away from people, and Zuul shouldn’t be talked about. Or anything else that goes on in there.

nods Agreed, and I am looking forward to putting the lessons learned this time around into effect next year to make things even more awesome, and more to the point, less disruptive to those who don’t partake of said tent.

I’d like to suggest the little hub between the showers and kitchen as a viable place for the “safety” tent. It’s small and not many tents can fit there so only those who don’t mind the noise or don’t want to have to stumble very far to leave the party can set up shop there.

Personally, Zeta and I weren’t terribly far from CK’s bar and we slept like rocks. 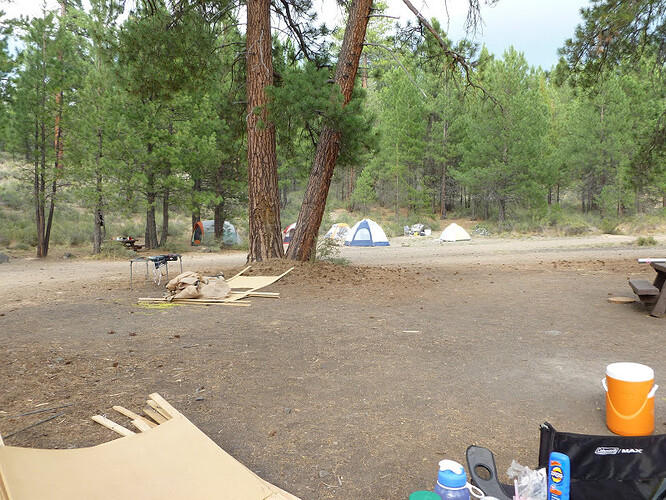 This spot here. Past the two trees where those other tents are, unless that’s meant to be a staff tent area or something.

Looks brilliant okers, and I am totally down for setting up shop there next year if that is cool with everyone else.

This area is ‘Camptire Fails’, the future staff camp.

Edit: In truth it’s not a bad idea. I’ll brainstorm with staff and see if we should just move staff camp somewhere else.

Roger that, keep me posted on that one, this will go a lot better if I have a predesignated spot, rather then just having to find one at random.

Yeah, I mean you could hear some chants in the outhouses. I can atest to this… >.>

But that being said, I slept through events right outside the safety tent several night, and easily within sound range of it every night and had no problem sleeping.

It’s more for us light sleepers that do have a problem sleeping around CK’s tent. I think loud activities in general need to be relocated from certain sites so that there can be some quiet time after a certain hour.

I know it was discussed a little bit, but, if we end up with 4-5 camp areas, we can designate some of them quiet/loud/normal
Type - Quiet start time
Quiet - after 11p?
Normal - after 12a?
Loud - after 2a?

Koda and Z came up with a really neat idea I expanded on:

Instead of separating camps by color, we separate them by noise by allowing attendees to create their own mini theme camps within their bigger camp. Like informal ad hoc happenings, it would have wristband checkers in the drinking tents (Like CK’s safety tent) and happenings volunteers assisting where needed. Further towards the sandbox is the noisiest, getting quieter. Managed with enforced noise control. Let’s say, figuratively, that we have 5 camps. Camp 1, closest to the sandbox has a quiet time of 2am. Camp 2 is 1am, Camp 3 is midnight, Camp 4 is 11pm, Camp 5 is 10pm. Adjustable/more nameable once a full map is scribed. For individuality’s sake, each camp gets a blank white flag and the campers there can decorate it however they see fit using their resources on hand.