Ever wanted to experience a classic automobile but was smart enough to choose not to own one?

Don’t mind a complete a total lack of even the most basic of safety equipment?

Does the thought of traveling on mountain roads with only single circuit drum brakes between you and certain death sound perfectly fine?

Then boy, have I got the ride for you!

Travel to CFT in unparalleled Style (google Virgil Exner), Danger (pillarless cars tend to pancake in a roll over), and comfort … “comfort” in a 1960 Dodge Dart Phoenix. Experience a V8 sound track to die for, panoramic views from it’s bubble top windshield, smell the air (exhaust fumes) and feel the wind from it’s B pillarless, hard top window openings.

You will be responsible for half the fuel bill, more or less half, it’s debatable. The car manages 20mpg or so (I’ve seen 22mpg on flat stretches) on the highway when not fully laden. I’m expecting with the extra weight of gear, passenger, and mountainous roads to see more like 17mpg. The back seat has been removed, and the trunk is spacious as hell so there is plenty of room for gear.

Will depart Portland on Friday, Will begin return trip to Portland around noon on Monday. Odds of trouble free trip around 9 in 10. (if it were Reno you would play those odds and you know it!)

So there you are tough guy or gal, put your money where your mouth is and prove it! (not responsible for hearing loss, stunted growth, and various nasty cancers) 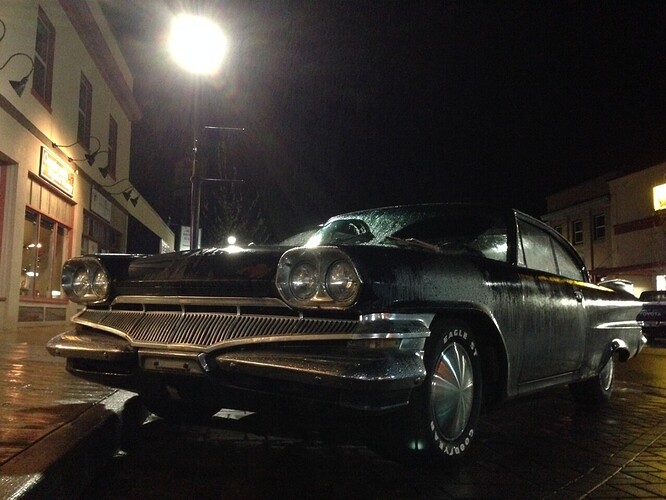 I don’t need a ride, but I wanted to say this post is awesome.

Ride along guest or not, the car is making the trip. It’s not that big of a deal, the car has already been to Bend via 26 and continuing on to make a 400mile loop with a stop along the way to see one of the few remaining AT@T Long Lines sites. 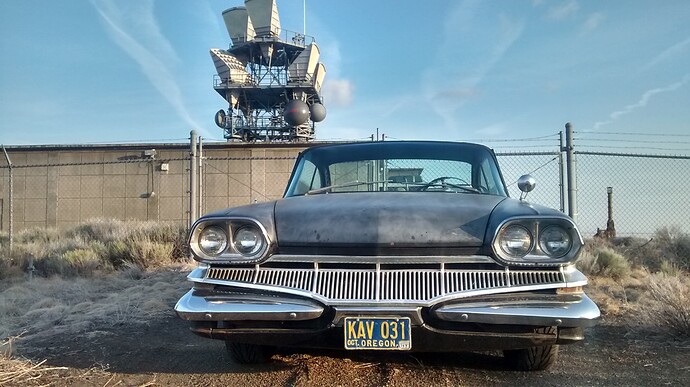 If I was to drive my 77 Dodge Aspen down, while not nearly as sexy, curvy or beastly, I’d be willing to bet there would be more real metal concentrated at the campsite than in most automobile factories today. Fuckin love it. Also I’m coming from opposite direction, so no ride needed. Comment on badass Dart was, however.

I don’t know about real metal in that car. It’s thin, paper thin. The grill is aluminum and the bumper halves weigh about 5lbs each. The entire car weighs around 3600lbs. You get in a crash in that car and you’re dead. I don’t care if it’s a honda, it’s gonna fold like a paper boat.

Cars got a lot safer after the 1962 model year. That’s when federal standards started to come along. This thing shipped with an unpadded steel dash, no seat belts and an A pillar with a dog leg in it. There was 0 safety in this car. Some of it’s features seem designed with the intent to cause injury. They only thing given any thought was style. Oddly though they did come with considerably better brakes than what the later models got. It had 11x2" drums all the way around and the front drums had dual wheel cylinders making them especially good for the era. I’ve swapped them out for the New Yorker 11x3 drums in the front and a new yorker rear axle with the 11x2.5" drums rear. Still single circuit, still manual. Consider that later cars that weighed a good deal more, and had more power, came with 10"x2" drums by the mid 60’s. (My 64 dodge polara had those and it weighed 3800lbs).

This topic was automatically closed 208 days after the last reply. New replies are no longer allowed.