(So yeah, I totally forgot to take any photos at all as I was busy having WAY too much fun. I am, in fact, trying to take advantage of you folks with the presence of mind, tenacity of spirit, and indomitably of will to remember to take photos.)

I didn’t take any photos either.

I look forward to any photos others post (and if you took any of Terra Firma the starnosed mole please please post them!).

If we can collect sufficient photos and videos, I’ve a furry(protocollie) over in Pennsylvania who is offering to make us a promotional video for next year!

This and this are absolutely stunning shots of the BotB! And the nature photos are astounding. You’re very talented! And with that, off to bed with me. XD

I didn’t get many at all, but I’ll post a couple of the good ones tomorrow, for now, sleep is what I need X3

Here’s a flickr album of some pictures I got at the con itself:

I got some video of the BotB parade and it’s pretty funny… other than that, I just took a bunch of nature photos. Might throw those up after school, tonight. 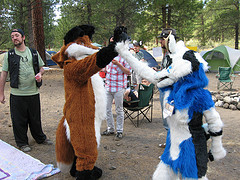 Thanks for the photos!

Here’s my Photobucket album. There’s a couple of shots of Terra Firma in there, although they’re kind of washed out.

I have a few (mostly nature) photos up on my FA page:

After seeing those glowstick pics…

I’m a fan of Thrash’s photos of a bunch of us collapsing Maowing’s tent around him.