Hey fuzzies! I’d like to run a field game, and want to know if anyone might already have some of things I’ll need for it. 2 plastic, foam, or cardboard shields, 2 cardboard crowns, 10 boffers that are all equal size, 36 balls (tennis, foam, plastic, etc), a plush or toy snail, and 12 jerseys in 2 different team colors.

The game is played with 2 teams of 6 (or 8), and extra players wait in line to replace others as they get out, returning to the end of the line of waiting players.

There are 3 different ways to win: Killing the enemy queen 3 times; getting 15 balls back to your base; or getting the snail to the enemy base.

The queen on each team is the only player allowed to run, has a crown, sword and shield, and any hit on a player (other than their head, for safety) is a kill. Hitting a shield or sword doesn’t count. An outed queen may not be the queen again for the rest of the current game, and on the third kill, the game is over with a military victory.

The rest of the team starts as workers, and may not run, only fast walk. They may pick up one ball from the center of the field, and then return it to their base to attempt to win by economy. If they are hit, they must drop their ball immediately and they can never throw a ball, only drop it at their feet. They may also bring the ball to a sword, and pick up the sword to become a soldier.

Soldiers may also not run, and must remain as a soldier until they are hit by an enemy soldier or queen, at which time they drop their ball and sword at their feet. They cannot pick up the snail.

Workers with a ball may bring it to the snail, drop the ball, and pick up the snail. They must hold the snail in the air above their head, and must remain in 2 points of contact with the ground at all times, so must crouch and move, alternating one foot, then the other, then their hand. They must move along the center line of the field toward the enemy base, and if they reach it, their team wins with a snail victory. Workers are allowed to drop the snail and run away at any time.

This sounds like a great afternoon/evening activity! I don’t have any of the equipment but, I can totally help get some teams together!

The snail mechanic sounds VERY interesting. I don’t have any of the equipment to potentially help, though there’s a possibility I might have something less-trip-hazardy than balls to substitute for the balls, but I am running low on time to build them, so definitely don’t count on it.

That would be cool if you could contribute, but I wont count on it. The
balls are ideally foam, so they just squish under foot. And they’re
supposed to be purple berries or something, though thematically that does’nt seem to go well with a game about bees

I’m wondering if we can theme this to better fit Space Camp. I’m thinking…Space Bees.
(Okay, I tried. 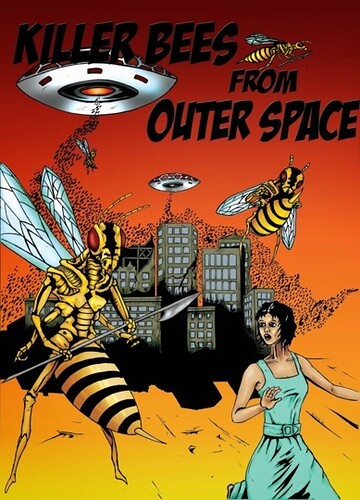