So, I thought about making it to CFT last year, but in the end I couldn’t swing it. This year may be looking a bit more likely, assuming I can pull the funds and a couple of compatriots together in time!

Anyway, I own a large portable shade structure, colloquially called a “monkey hut,” that I might be able to bring to contribute to the event. It’s a sturdy tunnel contraption made of PVC piping, heavy-duty tarps, 4’ bungees and and tarp ties, staked with 2’ rebar pieces and 10" nails. Assembled, it resembles whale ribs and has a 12’x30’ footprint, and is about 8’ high in the middle. I built it last year for use as a Burning Man shelter, using a design that has been many years desert-tested, and it performed fabulously even in those harsh conditions - so, I expect it should be no problem at all to set up in a semi-forested/scrub environment, which has a lot less wind.

I’m trying to figure out what I could do with it there, though! I noticed that last year people were disappointed there was no “headless lounge” or other place where the suiters could suit up / cool down / hang out aside from their own tents - I’m wondering if anyone has made plans to bring a structure for one, as yet? A monkey hut, with the addition of some sheets tied up over each end, and perhaps some chairs, maybe a small folding table or two for repairs/drinks, would make an excellent headless lounge, I think! I can provide the structure and setup/teardown, all I’d ask is that people not mess with the parts, not hang anything heavy from the PVC eaves, and keep fire away so as not to burn holes in the tarps! The thing I don’t have right now is a good lighting system for it at night, but if someone else can contribute a good battery-operated lantern or three, these could easily be hung from the spine for suiting/lounging at night.

I wasn’t sure if Happenings is the best place for this, since it’s not really a Happening so much as a location… but I figured I’d put it here anyway.

I can’t imagine it would really need to be staffed much either, aside from perhaps refilling a water cooler or sweeping the ground tarps free of dust/dirt now and again. If I am to make it out, I’d also like to be taking some commissions in the art tent during the day to offset my travel costs, so I would not be able to man it 24/7… but I am also a suiter (birdsuits!) so I expect I’d be popping into it to use it periodically myself, and can then check to make sure the structure is holding up and such.

I admit I’m not yet 100% sure I’ll be attending - never sure 'til registration is done! - but if I do, I’d probably be bringing the hut along regardless as it is easy to transport, and extra shade is always useful in the desert.

On the chance I can’t make it this year… I could also point any interested parties among your staff toward the plans for how to build monkey huts! They are not only sturdy and versatile (expandable to any length, just add more ribs), but they’re very cheap to build, and you can get everything you need at your local Large Home Improvement Warehouse. All told, I think I spent less than $175 on all the materials, which is about a quarter the price of a comparably-sized carports or pop-up canopies.

Any thoughts on this from staffers and such? It sounds like a good idea to me, but I’d like some input from those in the know.

Like, maybe you’re already planning a headless lounge this year, and it could be used for something else instead…

I’ll bring this up with sparky, as she is heading(haha) our headless lounge. But really, teaching people how to make these structures would be an absolutely PERFECT kind of Happening, especially if it was a collab build of some kind!

Suiting was not a big part of last year’s event and I may not even bring my suit this time. But your structure sound like something very useful for general purposes or perhaps a designated artist’s alley/marketplace if we decide to do that. Or maybe Happenings in general could take place there or something.

Crowly: cool, thanks for giving her the heads (lol) up! I hadn’t thought about making the happening about building huts themselves, though I suppose that would be useful! I’d probably not be able to demonstrate how to cut the pieces there, since they’re all made already… and the process produces messy plastic shavings, and the saw I used is a loaner! But, I could at the very least make a basic illustrated instruction sheet, and bring copies to hand out to any interested parties. The plans are available on the internet, as well, but I know I like having things down on paper.

Sparky: Ah, good to know - since I haven’t been yet, I wasn’t sure how big a component of the event suiting was. I just saw a few people who were requesting a place they could suit up other than their tents, since it’s hard to do so in your own if it’s shorter than you are.

I wasn’t sure if there was an artist alley tent already available, but I would definately be happy to set this up for such a use! Especially since I’d plan to occupy said artist alley a good portion of the time.

It makes a nice breezy shaded tunnel, which may be a nicer place to work than a closed-wall tent.

Another thought is this: I can actually split the one long hut up into two separate huts, 12’x10’ and 12’x20’, due to the tarp configurations I used. In that case I could put up the smaller hut for suiters to suit up / cool off in (I’d be bringing my own costumes, no matter what :D), and the larger hut as an artist’s alley.

Regarding ‘team builds,’ it’s actually a really simple process, and doesn’t really require more than 2 people, so I’d anticipate a lot of people just standing around watching. ^^; However, if I were to set it up as 2 huts, it would be possible to set up the artist-alley hut ahead of time, so it’s ready at the start, and then maybe do a demo of how to set up the 2nd smaller hut a little later for anyone who’s interested to help and/or watch. I could pass out the instructions then, so people could follow along.

Thanks for your replies, and let me know what you think of these new ideas.

For reference of size/design/scale, here’s a picture of the 12’x20’ hut, set up: 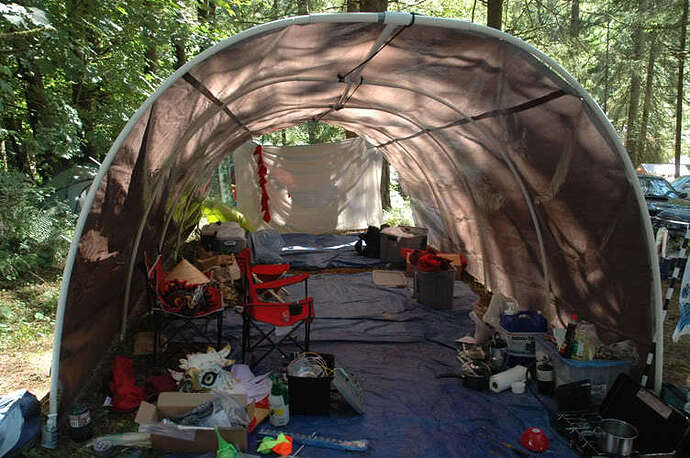 We added another 2 ribs, or 10 feet of length, to it before Burning Man; so, this is what the larger of the huts would look like if it were set up as 2 separate ones.

The smaller hut would then be the same height and width, but half the length of the one pictured…

If I can get it up there I plan to lend my old tent as a headless lounge, its quite large (I just got a new, smaller one today I will be camping in). It should be big enough; I’d say four people could comfortably suit up at a time in there, anyways. Problem is I may not have room to get it up there.

If at all possible I’m going to try and get a luggage rack installed on my little suv, that should help…

This tent looks great! If we don’t use it for a headless hut we can always find some sort of use for it. Thanks for sharing!

i, still, support a headless/suit up/down “lounge”. i wont be bringing my suits this year, partly because i will be also packing my mate’s stuff in my car, and partly because i am trying to sell my suits so i can have a custom one done of my fursona (should hopefully have it done and ready by 2012 CFT). but since i know what a hassle it was last year getting suited up and down and everything, i do support this fully, and will definatly volunteer to help set up/take down, and even “run”/stock/monitor it if need be, i want to see this happen. i personally believe this NEEDS to happen

I honestly think we could get more use out of it if we used it for the Artist Alley of sorts. Since this isn’t a very fursuit friendly event, not many people will be using it for changing into suits. That’s just my opinion any way.

oCe: That tent tube is awesomesauce. And even if it isn’t often needed for fursuit changing there is always more need for large tent type area to do group activities in so we don’t end up with with happenings trying to compete with people that just want a place to do some art or hang out and chat out of the sun.

i agree, it isnt really a fursuit friendly event…in part since we didnt have a fursuiting lounge (or whatever you want to call it) last year. i think that if people were presented with a place to suit up/down, cool down, or whatever, they would be more inclined to suit during the day time. i know that last year i would have done heck of a lot more suiting if we had a place to suit up/down and all. i could be wrong. but just based off of the comments on the “what we could do better next year” forum from last year, and the comments in this forum, i would thing that the majority of suiters that have posted their opinions would support it

Again, currently the plan is to use my old tent, which is a big enough trust me.