We’re fortunate that Ogden Group Camp is a relatively dark-sky site. It’s Bortle Class 2, which means you should be able to see the Milky Way and lots of other stars.

The bad news is that this year is a full moon (it will be full on Thursday night), which will wash out some of the stars. The trees will help some, at least.

There’s far more good news! The forecast is for clear skies for most nights. And the Perseid meteor shower will be peaking on Friday night. This is one of the better meteor showers of the year, peaking at up to 100 meteors per hour.

Perseid meteors can appear in any part of the sky, but will appear to radiate from the constellation Perseus. This will be to the NNE and just above the horizon shortly after dark, and will move up and to the E as the night goes on. The easiest way to find it is to look for Cassiopeia, which looks like a squished ‘W’ near the Little Dipper. But you might catch one looking in almost any direction. The green circle is the radiant point, and then the second image might help you locate it relative to the Little Dipper. 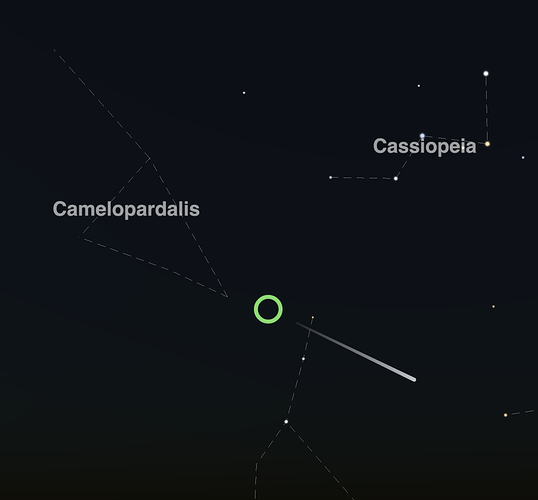 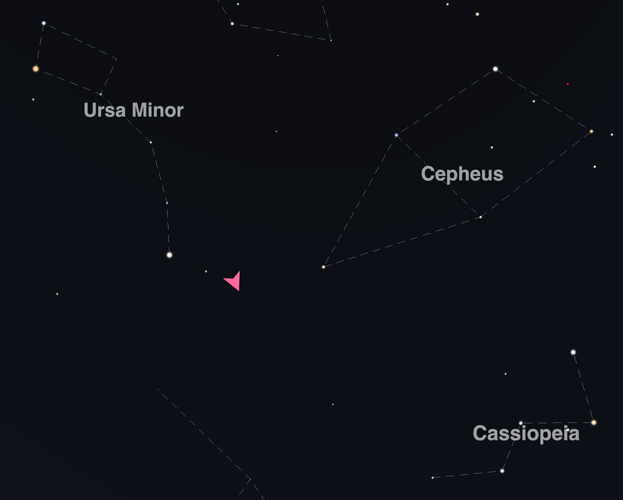 We also have a few prominent planets to look at:

Right now, it doesn’t look like the ISS will be visible passing overhead. Tiangong (the Chinese space station) might be faintly visible, but so low to the horizon that I don’t think it will get over the treetops. If it is visible, it will be to the south, and will appear to fade out partway across the sky as its orbit takes it into the earth’s shadow.

I’ll be bringing some binoculars, and I know a few other people said they were too. There isn’t a formal astronomy happening, but feel free to find me and ask!

Hey, thanks for the space weather, it’s neat to see! I love looking at the stars out there. :-}