Are you bringing a generator?

Power supplies are needed for the nightly dances and possibly for other happenings! While the con has generators of its own, they will be used by the kitchen and for other essential services.

If you are bringing one, would you be willing to share them with others during happenings?
Let us know!

Please note: Please bring a recently inspected fire extinguisher along with your generator!

We can probably bring our generator. Can’t let the rave go unpowered!

Thank you reago! I’ll do my best to gather donations of gas/$ to help cover the cost of using it!

Don’t think we have an uninterruptable power source, so if someone has one, would probably help keep the DJ equipment and other electronics lasting longer.

Reago- That would be awesome!

What are the specs on it?

I don’t have a UPS, sadly. I’ll see if I can come up with one, but I’m not 100% on that. I have a surge protector, so that should help a little bit…buuuut yeah. XD

I’ll bring along some gas to contribute as well!

I’ve been trying to figure out how to power all my gear without a generator…and I don’t think that I could acquire that many potatoes.

At the very least I’m pretty sure someone has a good enough sound system in their vehicle. Things always work out somehow.

Bump to remind everyone to bring a fire extinguisher to go with their generators.

I’ll be bringing a quiet 2KW generator (Honda EU2000i), ~10-15 hours worth of gas, and the usual complement of fire extinguishers. I can bring more gas if necessary, but I only have one airtight metal can right now.

FYI: You can get gas only ~15 minutes drive from the site; it’s not a big deal.

If there’s room, will bring my solar array with its FrankenUPS (2x deep cycle batteries; 120VAC inverter w/96 hour run time at 1500W). Since I don’t know if it all fits in the suburban yet, it will have to be a maybe/backup for the other sources. It’s been out to burning man twice, and is quite reliable. 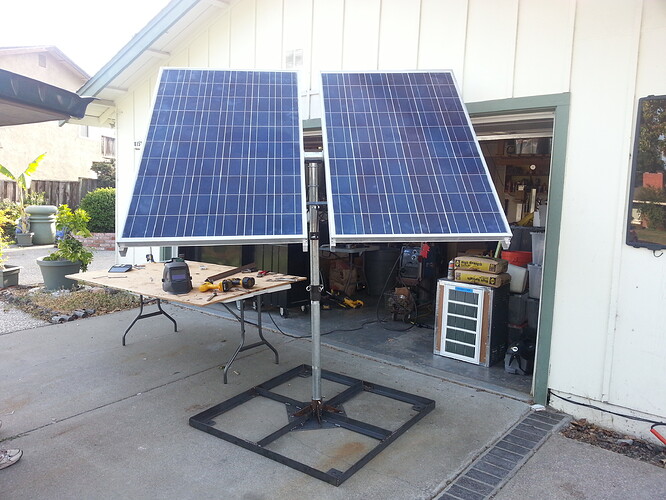 @dukehyena Oh, wow. I’ve wanted to get something like that for CFT ever since I saw you post it on Twitter a year or however long ago.

The con’s main power uses are, in no particular order:

I have no idea if you were wanting to loan use of this to the con or use it for just your own stuff, but even without the solar panels, the battery bank and inverter could be really useful on their own. (Our little generator does have a DC port for battery charging, but we’ve never used it.)

Can we put this on our wish list @Crowley

If you wanted to build one someday, I can provide a breakdown of parts and a wiring diagram. Total cost was about $1300. For the 10-day burning man event, that worked out to about $27/KWH. Kinda high price, but if there’s no other source of power… Over 10 days that first trip out in 2013 it generated 48KWH of power. Inspiration came from this: http://imgur.com/a/FJ3X9 and I got deeply discounted scratch-and-dent solar panels from http://www.mlsolar.com/ - they show up on Craigslist http://sfbay.craigslist.org/scz/fod/5117015601.html

This year I’m repackaging out of the crazy old cabinet into a waterproof plastic case.

Borrowing a friends respectable solar setup that he used at BM last year as well as bringing a few extra batteries, my franken-generator from previous years, and a 1500w peak, 750w rms AC inverter.